The benefits of taking a hiatus

I stopped drawing for a long time. There is a time and season for every activity under the sun, and in the late 90s/early 00s it was time to put the pencils and paper to one side and give the drawing a rest. During that period I dabbled in other forms of creative expression - writing and 3D/digital art - and in retrospect, this was a good thing; it enlarged my repertory of skills and enabled improvements to the work in traditional media when I came back to it. Because I knew how to use graphics software, I was able make alterations to scanned pictures, such as digital repositioning where the composition was screwy and making alterations to the brightness and contrast of a picture, turning partially-completed pictures into more finished ones.

Also, and perhaps more significantly, because I'd been unable to draw for a long time, recovering the ability was a gift, making me more grateful for what I could do and less ungrateful for things I couldn't. I struggled, and continue to struggle, with rendering the human figure, but while the twentysomething me would have continued grappling with this problem and ignored other subjects, the fortysomething me is able to put the people pictures on the back burner and concentrate on what I'm actually good at, which is scenery and architecture.

The other thing I've acquired is the patience to see a picture through to completion, even when it seems not to be going well. There are still unfinished pictures in my pile at home, but the ratio of completed to incomplete pictures is better than it was twenty years ago, and every once in a while I fish out pictures that haven't gone so well and try to find an alternative approach to make them work.

The reason for this break from traditional media? I was drawing from an early age and continued to draw right up to my mid-twenties. As a young adult, finding myself surrounded by more gifted artists at Brighton University and knowing I had to make a career out of this skill very soon, I pushed myself to get better and attain that professional standard. And then I got my first job, which involved drawing 8 hours a day, 5 days a week, and I... broke. It was too much.

Drawing became painful. Not physically painful, but inwardly painful in a way that I have never been able to adequately explain to anyone. It had ceased to be enjoyable long before, but now there was a debt to pay off even after drawing just a couple of lines and I had to stop, find something else to do, and find some other way to discharge the creative energies that built up and up over time.
Posted by STEVEFRIARS at 05:49 No comments:

After much dabbling in using Poser as a reference tool and (in my darker moments) actually *tracing* over Poser renders, I've come across a professional comic book artist who also uses Poser. This is very surprising as I was under the impression that Poser was more of a hobbyist's tool. This artist, however, works for Marvel and I've come across his work in a couple of graphic novels. The use of Poser figures as the basis for his characters is unmistakable; Reed Richards is Michael 3, Miss Marvel is Vicki 3, and the Drax the Destroyer is the Freak.
The problem? These images lack life, for one thing, all the characters looking a little bit stiff and over-shaded. The other is that Posted by STEVEFRIARS at 01:22 No comments:

Blood from a stone

Writing a story is really difficult. I'm just coming round to the fact that you can't simply sit down and write something great as easily as talking. I'm not a genius at this and even geniuses need to work at what they do.
I read through my story last week and thought the first few pages (the bits I rewrote after realising the story needed more humour) were pretty good but after that the thing went downhill and never recovered. This left me in a place of despair.
Posted by STEVEFRIARS at 09:42 No comments:

Work continues on the pictures for my story. I've experimented with placing hand-drawn characters in 3d scenery and it almost works, but not quite.
I took a look at some stills from Ralph Bakshi's Lord of the Rings and Fire and Ice and noticed that he placed cel-drawn figures with flat colouring against painted backdrops.
Posted by STEVEFRIARS at 10:23 No comments:

Just over a year ago I participated in a project to draw the London churches designed by Christopher Wren, set up for the members of a meetup group. There have been emails since then from the leader of the group about putting together a book using our pictures and putting on an exhibition. The latest email has confirmed that we have a venue in a London church to display our pictures but no boards to hang them on.

Posted by STEVEFRIARS at 10:20 No comments:

Yet again I'm trying to work out how to do the illustrations for my story. Last night I tried tracing over a print of one of my Poser pictures (using a lightbox) and am feeling... unsure about the results. Of course, tracing always feels like "cheating" but I'm not trying to produce a drawing so much as do extreme post work on a digital image.
The digital pictures - rendered in black and white using Poser 10's toon shader - are almost there. There are just things I can't do with Poser, like produce flexible tendrils for one image in which a character is being attacked by a carnivorous plant. And the model I'm using for the story's central character looks more or less like what it is - a child's body with a cat's head and tail stuck on it.
There's also the matter of using models by third party vendors that those vendors would no doubt want credit for if they featured in one of my pictures.

My problem is that I have a brain that overcomplicates things, always trying to find a more elaborate way to tackle a simple task.

My story is in the process of being rewritten yet again, this time in the third person rather than from the central character's perspective. It is like the weights have come off, and the writing is now so much easier, without the need to keep describing everything through one person's eyes. This whole story has been through a gradual process of simplification, in fact. To begin with I was writing it from the perspective of a character who knew nothing about the universe he was exploring and that was *really* difficult.

Posted by STEVEFRIARS at 23:34 No comments:

I have finally got some business cards done, after a great deal of struggling with ratios, shifting details like my email address around and deciding which of my many pictures to place on the reverse sides of the cards. Unfortunately, when the cards arrived there was an annoying white strip on the bottom and right side of each card, necessitating the removal of half a millimetre from two edges of each card with a hobby knife, which kept me busy on Monday evening.
I gave Moo.com the requested feedback this evening, explaining exactly what the problem was. 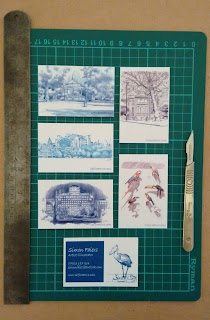 Posted by STEVEFRIARS at 14:19 No comments:

I am Elvis and I am stuck in this blog! Help me!!!